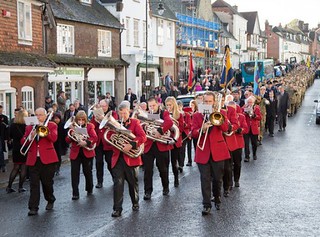 The band lead the parade from the town centre to the War Memorial.

LEST WE FORGET: Article & Photos courtesy of the Courier Newspaper

OVER 700 people turned out to pay their respects to our fallen armed forces in Cranbrook on Remembrance Sunday.

The moving tributes began with a service at St Dunstan’s Church before a parade up the High Street to the war memorial where poppy-wreaths were laid.

Young and old came together for the event, with children from Kent Army Cadets, Cranbrook School Combined Cadets, the Scouts, Cubs, the Girl Guides and nearby schools joining the Royal British Legion and the Cranbrook Town Band in the commemorations.

In the centenary year of the First World War and as Britain withdraws from 13 years of conflict in Afghanistan, the annual service was even more poignant and drew huge crowds from around the area. 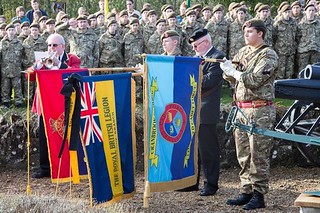 2014 War Memorial 2
Standard Bearers dipping flaging at the start of the last post before the 2 mintues silience. 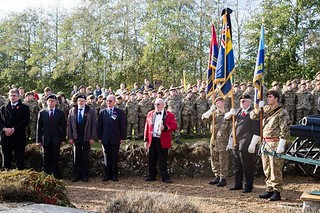 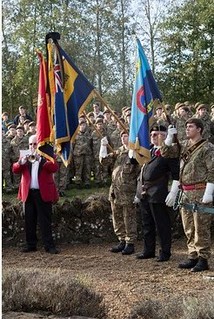 David Hazlewood, chairman of the Cranbrook branch of the Royal British legion, said: “Overall it was a fantastic event – it did exactly what it said on the tin – to commemorate all those who served and died in all the conflicts – both recent and historic.

“With the weather being so good it made it even better. A particularly poignant moment was the laying of the wreath for Anthony Normon, a Cranbrook man who was killed on the HMS Sheffield in the Falklands – we always lay a wreath for him.

“It has got a big meaning this year with the anniversary of the commencement of the First World War. I suppose the centenary had a big effect on people attending but I don’t think any war takes precedence over any other.”