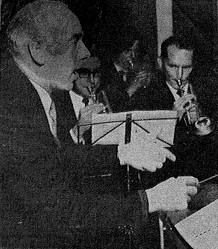 Polishing up for the top brass.

NOTES rather than letters will be receiving the attention of Cranbrook postman Fred Carter next Saturday, and he hopes there will be no wrong deliveries.

For Fred leads Cranbrook Town Band, formed almost 50 years ago, into one of its rare competitive excursions, a regional band contest at Chatham.

Nick, as he is known to his fellow musicians, followed his father as bandmaster and is a former sergeant of the Royal Fusiliers.

“We don’t expect to win any prizes but it will be a very useful experience” he says.

The band, at present some 30 strong, come from all walks of life, brought together by their common love of making music.

Trombonist and band secretary Des Franks is a company director, and there are office workers, electricians, a plumber and even youngsters still at school.

Anthony Smithers (cornet) is only 10 and the youngest of them all. His brother Alan, 12, has been heralded as an exceptionally talented baritone player.

The fair sex are charmingly represented by Pauline Clark (16) on the tenor horn, and by Carolyn Apps (15) who plays a cornet.

Oldest member of the band, now unhappily not too fit, is Bill Tickner, of Tenterden, who is in his seventies.

The band, which is entirely self-supporting, recently spent nearly £200 to have the instruments converted from high pitch to the now more popular low pitch.

Band chairman John Saunders would like to see future excursions across the Channel to compete with bands of other countries.

Whenever there is any surplus money available it is promptly spent on buying further instruments so that more youngsters will be encouraged to join. 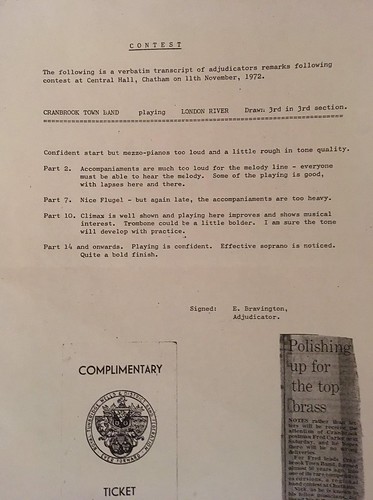