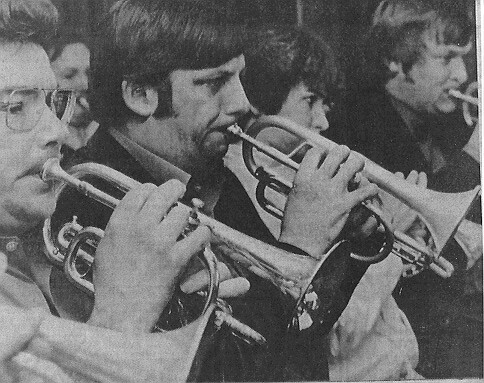 The early 80’s Solo Cornet line-up practicing for one of the first massed band concerts. The following Press article explains what it was all about.

Putting a Polish on Brass.

In its 79th (Not quite that many) year of putting a polish on brass band music, Cranbrook’s own prized band is set to make new friends – and new members this year,

The old ooompah-pa-pa days have long gone, and more than £2000 has been spent on new instruments – including cornets and a horn – and next month the band plans a grand concert.

Cranbrook, Angley, Dulwich College Preparatory and Goudhurst Primary pupils will all be taking part at the Queen’s Hall, Cranbrook School, in a great band evening on March 10. Each School will play two pieces of its own choice, followed by the town band drawing on its repertoire.

All the Bands will then combine to play this year’s selected piece, The Procession and March from Bacchus by Delibes.

“More than 150 children took part last year. The kids love it and the parents come along too” explained band secretary Mr. Peter Evans of Staplehurst. “Last year we chose music from Orpheus in the Underworld. It was very successful.”Only last autumn, Cranbrook’s band competed in a youth festival in Folkestone and was placed third out of nine bands.

It was the first success in a decade and for several players their first experience of competition play.

Last May a Sponsored, ten-hour concert raised £2,100. Most of that money went towards the new instruments that were so badly needed.

“We have 30 members now and we want to encourage the youngsters to join.” said Mr. Evans. “We would also like to hear from anybody who would be interested in starting a youth band.

The “Massed Band” concerts continued throughout the 80’s and were very successful in helping to bring youngsters into the band. Sadly the retirement of school music teacher and former Town Band conductor, Nick Carter saw the Massed Bands concerts come to an end. Many school children will never forget the magic and mayhem of 150 brass musicians playing together.