Setting up for one of Ian’s first concerts with the band.

No one knew quite how it would go but all went well and has continued to do so ever since. (Most of the time) 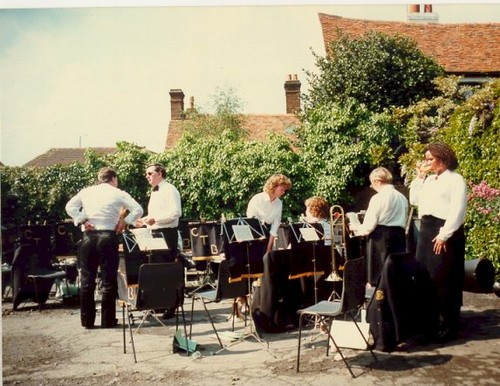 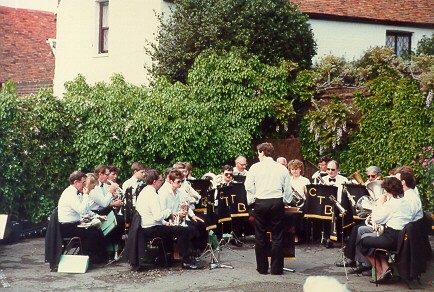 The Little Mermaid Inn - Rye in 1986
MERMAID STREET
The Mermaid Inn (previously named the “Little Mermaid”) sits on the cobbled Mermaid Street which is one of the main routes into the citadel of Rye. It is one of the most photographed streets in Britain, and leads the vistor to The Mermaid Inn, which is the perfect location from which to explore Rye. The building has 600 years of history and a reputation for being haunted, with many stories of its colourful past.
RYE - MEDIEVAL GEM OF THE CINQUE PORTS
One of the best preserved medieval towns in England, Rye is home to the enchanting cobbled Mermaid Street, the impressive Norman church of St Mary’s, a rich selection of specialist shops and a thriving fishing fleet. The famous Mermaid Inn was once the haunt of notorious smugglers, the Hawkhurst Gang. Camber Castle, built by Henry VIII is located in the dramatic Rye Harbour Nature Reserve. Rye was once surrounded on three sides by the sea, and its maritime heritage dates back to Norman times. To defend it against frequent attacks from the French, Rye became an ‘antient town’ of the powerful Cinque Ports Confederation. Visit the Rye Museum, which has sites at East Street and the Ypres Tower – the second oldest building in Rye open to the public, built in the early 14th century and part of the town’s defensive walls. Take time to discover its architectural treasures and narrow passageways. Climb the tower of St Mary’s Parish Church for fine views to Rye Harbour Nature Reserve and the beautiful hilltop town of Winchelsea with its maze of medieval wine cellars. Rye has always been a magnet for writers and artists. Lamb House, a National Trust property, was once the home of Henry James and later E.F.Benson, creator of the Mapp and Lucia books. The artists Paul Nash, Edward Burra and Captain Pugwash creator John Ryan all lived in Rye.