The Band at the end of a great concert

“Jerusalem” bringing the concert to a close

19th September 2009 saw the Band at All Saints Church in Staplehurst for the first time in four years. We were performing in a joint concert with a scratch choir that had spent the afternoon rehearsing their programme. The choir, conducted by Bryan Gibbs were in tremendous form and produced a programme of real quality. One of the delights of the evening was the guest tenor Richard Kent who sang Total Eclipse by Handel and Cajus Animum by Rossini. The choir and band alternated throughout the evening with a rousing finale in the style of the Last Night of the Proms.

The Band’s programme opened with Horizons and included a number of solos including Concert Etude played by Vicky Mace; America/Love on the Rocks featuring Richard Warren – both of these players were performing solos with the band for the first time.

Old timers David Newsom and Alan Smithers completed the solo spots with Benedictus and An Untold Story respectively whilst Bob Turner excelled himself with an adlib solo in Swingtime Religion. Dean Goffin’s The Light of the World, Dreamcatchers and Let’s Face the Music and Dance completed the Band’s contribution prior to the finale containing Jerusalem; Pomp and Circumstance and Fantasia on British Sea Songs.

A thoroughly enjoyable evening on all counts – the choir sang well and the band played excellently!! 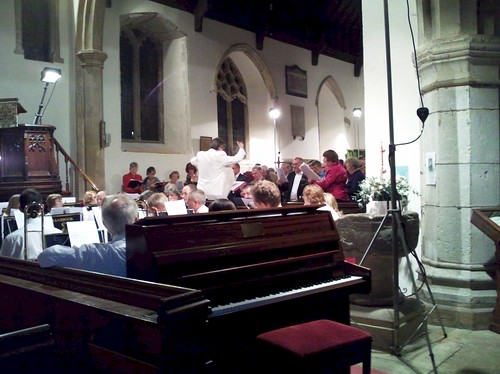 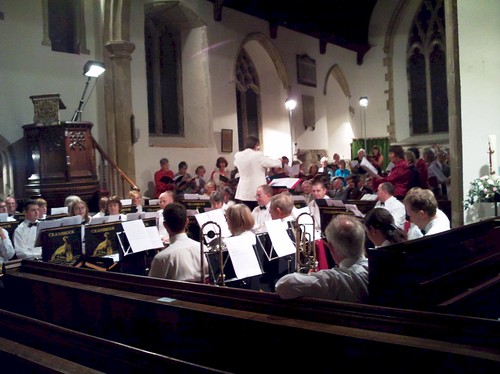 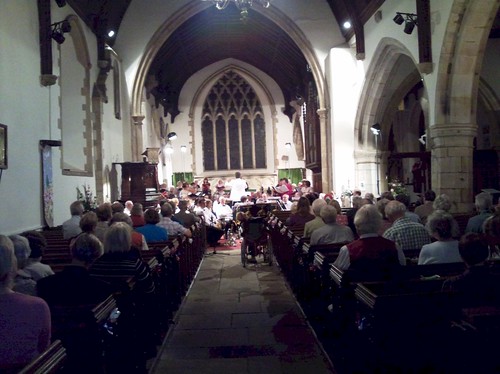 The Band at the end of a great concert 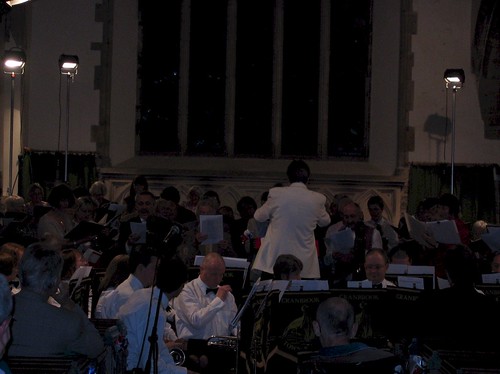 The music to Blake’s words was composed in 1916 by Sir Hubert Parry, specifically for a meeting of the “Fight for the Right” women’s suffrage movement being held at Queen’s Hall in London that year. In the final stages of the suffragette campaign, he conducted it himself at a performance at the Royal Albert Hall, which is when it became known as Jerusalem.

Its association with the women’s movement led to it being adopted as a hymn at the annual general meeting of the National Association of Women’s Institutes in 1924. It is still sung at their AGMs and branch meetings to this day.

In 1922, Edward Elgar scored the music for orchestra, giving it the grandiose sweep that we have associated with it ever since. This is the version that is performed every year at the Last Night of the Proms, at the Royal Albert Hall. On hearing it, George V is said to have declared that he wanted it to replace God Save The King as the national anthem.