The band went on their first foreign tour during the summer of 1997. We performed on the 11th and 12th of August for the local Rheingau Wine Festival in Weisbaden. The German festival was celebrating its 20th anniversary and was awash with people, alcohol and food, the latter two being a great source of interest for most of the band ! After a long coach trip we played at the opening ceremony and then gave two concerts to a packed and very boozy Weisbaden. We had taken a number of guests from other bands, including conductor Nigel Simmonds who took the baton in Ian’s absence. It was a very enjoyable trip and set the bench mark for future tours. 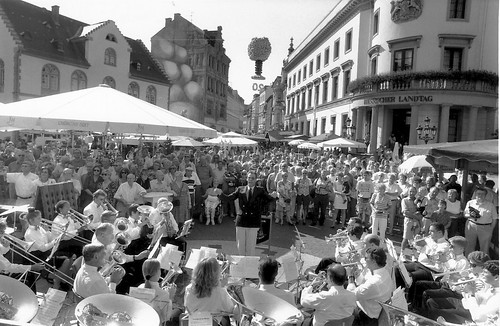 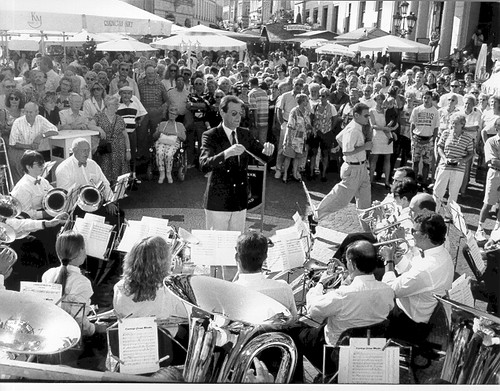 Opening the second Half with "Cortege from Mlada" 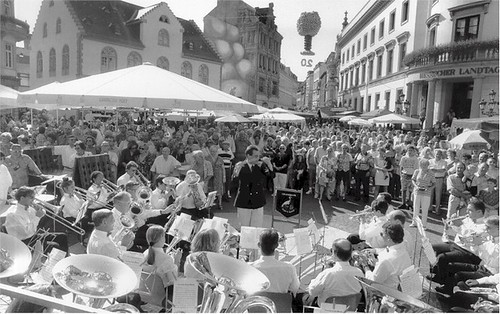 Playing to a large crowd of German Wine Tasters
Weisbaden

With more than 270,000 inhabitants, Wiesbaden is one of the major German cities that stand for a sporty, cultural and socially vibrant life. The events calendar of the state capital is colourful and bursting with things to visit: sports events that draw huge crowds such as the Ironman 70.3 are just as popular as the Theatrium, the ”classic“ among Germany’s street festivals, the ten-day Rheingau Wine Festival, the Wiesbaden City Festival that guides its visitors to the most beautiful squares and quarters in the city or the Twinkling Star Christmas Market during Advent. Internationally renowned ensembles can be seen in the Hessian State Theatre every year for the International May Theatre Festival, and the Rheingau Music Festival draws famous orchestras and conductors to the Rheingau and the state capital. A visit to the Museum Wiesbaden will enthral art lovers. With its more than 90 works by the Russian painter Alexej Jawlensky among others, the two programme house possesses the most important Jawlensky collection in the world.

Wiesbaden is also a modern health resort with a longstanding tradition. Even the Romans appreciated the healing and therapeutic effect of the 26 hot springs. Wiesbaden has transformed its good reputation as a “classic spa” into a recognised centre for the treatment of rheumatic and orthopaedic disorders. You can experience the therapeutic diversity of the hot springs in Wiesbaden’s thermal baths. Beyond that, numerous parks and green belts invite visitors and locals alike to linger and relax. A wonderful way of discovering Wiesbaden and the Rheingau on foot is on the varied hiking, wine and nature trails.

Due to its proximity to one of the most beautiful and traditional wine-growing regions in Germany, Wiesbaden is often called the ”Gateway to the Rheingau“. Its numerous palaces, castles and monasteries make the Rheingau an attractive destination for day trips. During the grape picking season in particular, the unique charm of this colourful landscape unfolds when the vintners’ taverns open their doors and the wine festivals are celebrated in the region.

History of the Wine Festival

The history of the “Wiesbaden Wine Festival” in the Hessian capital was a success story from the very beginning. It was founded in 1976 with the aim of improving the urbanity of the city and providing the Rheingau vintners a platform on which to offer their wonderful produce. At the premiere, still and sparkling wines were presented at 33 stands spread around the Schlossplatz, Mauritiusplatz and the pedestrian zone. The wine festival was such an immediate hit that the number of stands rose to 60 in the following year, and in 1978, when the festival area was extended to include more of the pedestrian zone, the wine festival boasted some 80 stands.

It didn’t take long to break the “100 mark”. Since the early 1980s when the produce on offer at the Rheingau Wine Festival was successively expanded to include culinary delicacies, the number of stands has reached a stable 115. Their lining the Wiesbaden pedestrian zone resulted in the Wine Festival being lovingly named the “longest wine bar in the world”. Structural modifications in the pedestrian zone resulted in the relocation of some of the stands to Schützenhofstrasse, among other places, also known and loved by wine fans as the “Schlutzergässche”. In subsequent years, Luisenplatz was also integrated in the festival but given up for the Dern’sches Gelände towards the end of the 1990s.

The combination of wine and music is unbeatable, and thus more and more musical interludes were organized at the Rheingau Wine Festival. In 2001, a year after the 25th anniversary of the Rheingau Wine Festival was hugely celebrated with special attractions; the music concept was revised with the aim of giving up-and-coming bands a chance. Since then, emphasis has also been on more modern music styles to accommodate the taste of the younger visitors.

2002 marked the “end” of the classic wine rummer which had served as the symbol of the Rheingau Wine Festival for many years. Today, a Rheingau wine glass symbolizes the premium event that attracts thousands of visitors to the Hessian capital every year.

At the request of the vintners, the Rheingau Wine Festival was given a new looking in 2003, which it still has today: the stands are located at the Schlossplatz, the square in front of the Wiesbadener Marktkirche (market church) and the Dern’sches Gelände. The “scattering” of the wine festival through the pedestrian zone was finally a thing of the past. Since then, there is music on three stages at the Schlossplatz in front of the Wiesbaden Rathaus (city hall), on the stage in front of the Marktkirche and the stage at the Dern’sches Gelände.

The Wine Festival always has specials in store and yet remains true to its character as a jovial and attractive event. Extended to ten days in 1995, the vintners avail of the opportunity to treat their regulars and win new customers. Visitors to the nationwide renowned Rheingau Wine Festival include large numbers of regulars, some of whom travel from afar. Still wine and sparkling wine consumption at every Rheingau Wine Festival is estimated at 300,000 bottles. 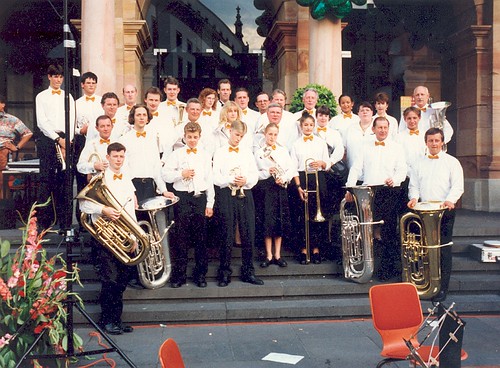