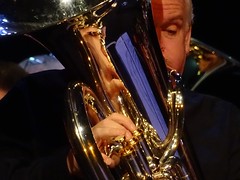 steve sykes concert : The Man Himself 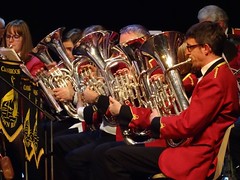 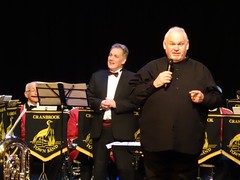 Steve Regaled the Audience with a tale or two.

On Saturday 26th November, eminent musician and tuba virtuoso Steve Sykes returned to play with the band in a concert supporting the Demelza charity. It had been such a long time since we last saw Steve that only 7 of the band members remained from his previous visit some 18 years earlier when he played with us to support the St. Georges Trust in another charity concert (see link below).

While we may all have had a few more grey hairs, the intervening years had done nothing to diminish Steves outstanding playing and he delighted audience and band alike with his solos and funny stories.

Steve’s busy day had started with a Bass and Lower Band Workshop where he imparted much of his wisdom to players from around the area, he then went on to rehearse with the band before the evenings concert. As you would expect at a concert featuring a player of Steve’s calibre, the hall was full of not only regular concert goes but musicians from other bands and groups all eager to hear Steve perform.

No one was disappointed and Steve’s 5 solo items all went down a storm. Steve finished off his performance with a Bass Section Solo item called “Forty Fathoms” which saw all five Bass players out front to perform together.

The band also rose to the occasion and gave a stunning performance in their penultimate formal concert of the year. Audience members enjoyed the usual mix of styles and were treated to a number of Rock & Pop items together with some beautiful melodies from “All Through the Night” and “Yesterday”, the second of our Beatles numbers. The pop group Queen were to feature again in one of our concerts and the apptly named “Don’t Stop Me Know” which is fairly new to the band, finished a fine first half. Both new and old pieces were on the programme and in particular Ian talked about “Born Free” being a favourite piece which he had first conducted with the band some 30 years ago.

It was also great to see members of the training/youth band perform just after the interval, albeit with a little help from a few of the adults to cover missing players.

As usual for a big concert we pulled in a few deps to bolster the ranks, a big thanks to Owen, Michelle, Dave, Mette and Tonie. In all we hope to have raised £1000 for the Demelza charity. 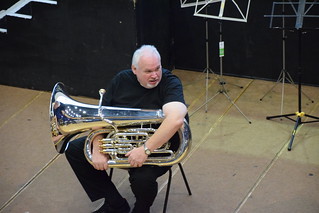 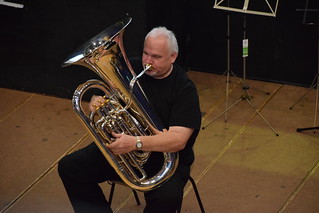 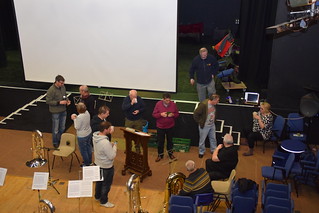 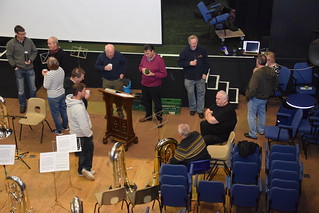 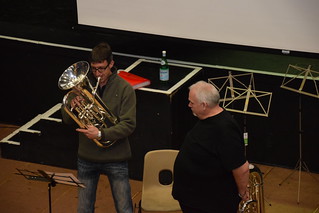 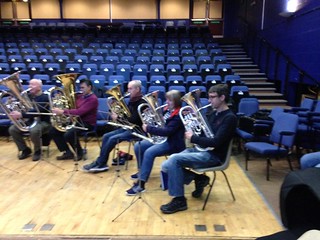 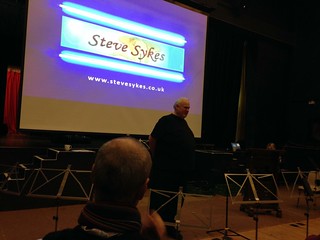 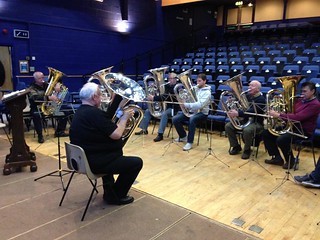 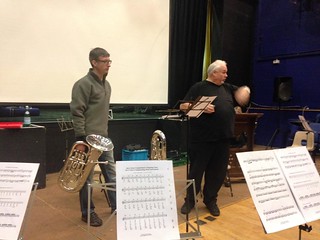 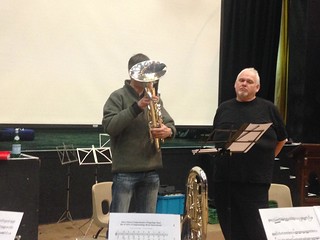 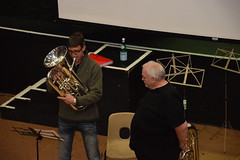 steve sykes concert : The Man Himself

Steve Regaled the Audience with a tale or two. 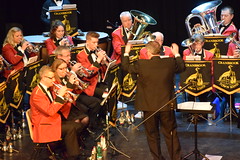 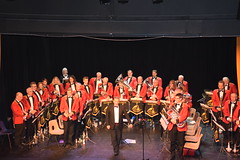 End of a Very Successful Evening 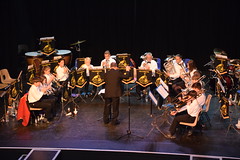 Training Band in Action after the Interval 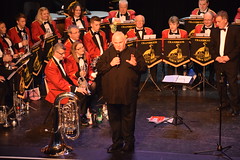 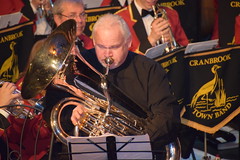 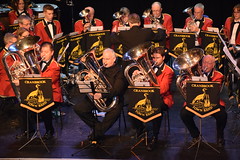 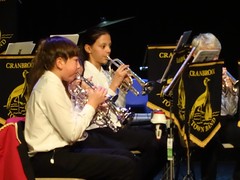 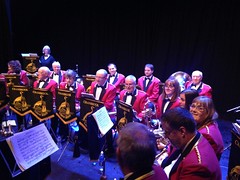 Waiting for the Curtain to go up. 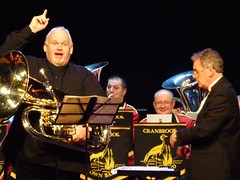 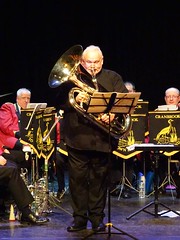 More Pictures can be found here
Programme
You can click on a programme item to view its recording (if available) in a new window. To view the whole concert, use the playlist in the Video section above.

Steve Sykes is without doubt one of the finest soloists to emerge from the British brass scene.

His musical roots are firmly based in Yorkshire brass bands beginning with Carlton Main Frickley Colliery Band. In 1978 he accepted an invitation by Elgar Howarth to join the famous Grimethorpe Colliery Band as Principal Tuba and Soloist. With Grimethorpe he performed as soloist throughout Europe and Australia. During this period Steve was awarded the prestigious title of ‘Granada Television Soloist of the Year’.

Because of an ever-increasing demand for Steve’s talent both as soloist, conductor and clinician, he now works as a freelance musician appearing in the USA, Canada, Europe and Scandinavia and is a firm favourite with players and audiences alike.

Many compositions for solo tuba and orchestra/band have been inspired by, dedicated to and premiered by him, including major works by Ellerby, Golland and Brand. One of the busiest soloists in the U.K, forthcoming engagements will see him performing in Australia, New Zealand, America, Canada and, of course, Europe. Steve has been directing Championship section bands since the age of 22 -among his professional conducting appointments have been famous ensembles such as CWS (Co-op) (Glasgow) and SunLife (Stanshawe). He has directed bands at the National Finals, British Open, All England Masters and European Championships and, of course, has many commercial recordings and national radio broadcasts to his name.

He regularly appears as an adjudicator at leading music festivals throughout Britain, North America, Norway and Switzerland. As a measure of his standing in the brass band movement he was recently invited to adjudicate at the National Brass Band Finals in London’s Royal Albert Hall and in March 2001 Steve adjudicated at the Yorkshire Regional Championships – regarded by many has the hottest seat in brass band adjudication! Steve is included in the British Federation of Bands’ list of approved adjudicators.

Steve has written articles and reviews for the ‘British Bandsman’ and ‘Brass Herald’ publications. He is tuba tutor at the celebrated ‘Brass Band Summer School’ (Bromsgrove) where he is now also responsible for the Brass Band Conducting Course. Steve is lecturer in low brass studies at Bath Spa University College and is tutor and Professor of Brass to HM Royal Marines Band in Portsmouth, Plymouth, Lympstone and Dartmouth.

Steve has been engaged as a clinician (responsible for instrument development) by the Yamaha Corporation and Besson Musical Instruments and currently performs on the new ‘Orpheus’ tuba.

His latest solo CD ‘Basso Bravissimo’ has now been released and is receiving acclaim not only from low brass aficionados but also from the wider musical world. 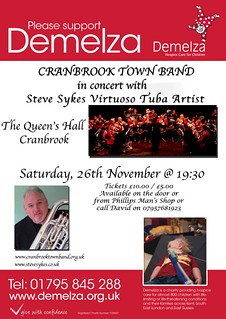 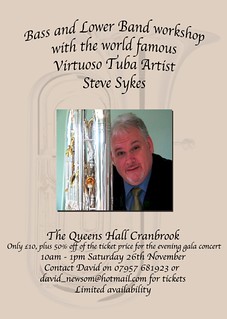 The evening of the 16th of May 1998 saw Cranbrook Town Band perform with World class Bass player Steve Sykes in aid of the St. Georges Trust.

The hectic day’s rehearsal and many previous Thursday nights dedication to the evenings programme made for a wonderful concert and a truly memorable night.